We are working in this repo (WIP) and changes will be made. Review this documentation often to be up-to-date with the new changes.

Voĉdoni in Esperanto translates to "to give voice". We aim to achieve change by empowering society from the bottom up, building the necessary primitives and tools to enable every voice to be heard, from a few individuals to millions of citizens. We aspire to be the most accessible and functional toolset on earth, open to every group of people, regardless of their position or resources.

We perceive voting as a collective signaling mechanism "to give voice", that can be fully digitalized, if provided with cryptographic guarantees about its integrity and its outcome. To this end, we have designed and implemented the Vocdoni Protocol, a universally verifiable set of rules and primitives that allow anyone to create and participate in collective decision making.

The Vocdoni blockchain is named Vochain. It is a Byzantine fault-tolerant network based on Tendermint that executes the Vocdoni Protocol logic represented as a state machine. Its main purpose is to register votes in a decentralized and verifiable format. Currently, the network can process more than 30K votes per minute while using no more than the resources found on commodity computers.

The Vocdoni blockchain requires a native token (VOC) to execute management transactions (i.e creating elections), but not for casting votes. Therefore, the voters can participate in governance processes in a free and gasless manner.

Vochain is currently based on Proof-of-Authority consensus. However, we are already working towards transitioning to Proof-of-Stake in 2023. Until then, the tokens are free and can be obtained by anyone by using our faucet service.

The current vocdoni-node code can be found in our github repository.

The Gateways provide entry points to our P2P network. They allow clients to reach decentralized services through a standard HTTP(s) API interface.

Internally, the Gateways act as a standard blockchain full node, but also as indexers, meaning that they store and update a separate non state-related database that contains digested information useful for fulfilling client query requirements. For instance, Gateways compute election results (which are not part of the state) and provide census services (so voters can fetch their election Merkle proof). To perform the indexer function, Gateways need access to the auxiliary distributed filestore.

Vocdoni currently relies on the InterPlanetary File System (IPFS) for storing auxiliary information. In a voting process, this includes information such as texts (questions, descriptions, and options), complementary images, as well as census. This data does not need to be permanent in order to ensure the voting guarantees, and is expensive to keep it around, so it is published to IPFS until it can be discarded.

We have designed the Vocdoni primitives in a modular fashion, which allows us to incorporate more data layers in the future, such as Ethersphere Swarm, DAT, STORj or Filecoin.

This section provides an overview of the Vocdoni flow for creating a participatory process, its main attributes, and configuration options.

The following diagram is a summary of the flow, from creating an organization account to the vote casting. 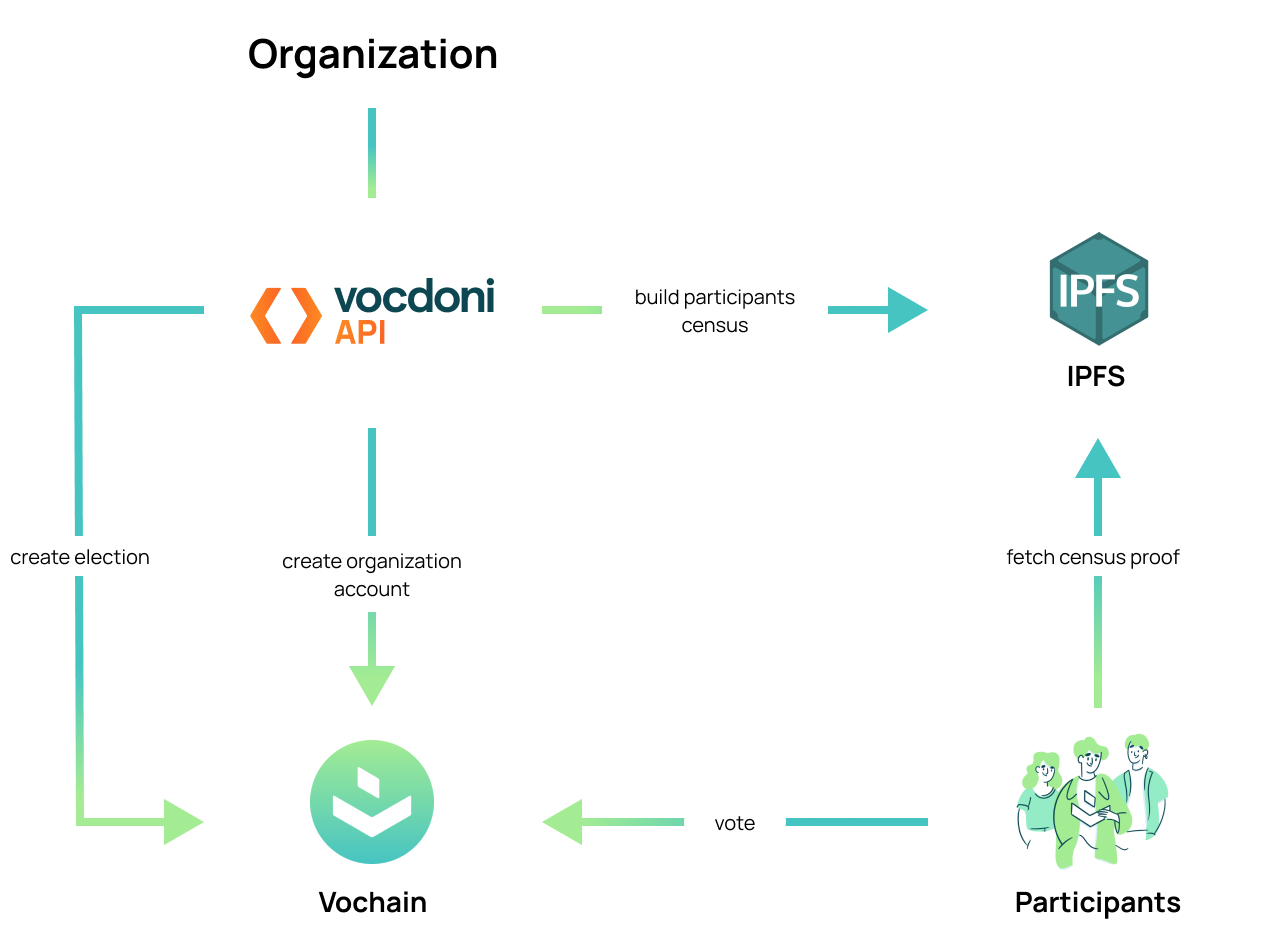 The census is a key component of every voting process. It defines the set of users (identified by a public key or address) who are eligible for participating in an election.

Vocdoni is designed to be as flexible as possible and to enable, at the very least, the most common use cases for elections. To this end, the protocol currently supports several census types and origins, and more may be added in the future.

The current census origins available are:

The current implementation of our Vocdoni API/SDK only provides the weighted merkle tree, so we will focus on this specific origin. More options will become available in the following months.

The census itself is represented as a binary Merkle Tree, where the keys of the tree contain the (hashed) public keys or addresses of all eligible voters and the leafs (values) represent the voting weight.

Using Merkle Trees, we can efficiently prove that a key/value belongs to the tree. For a tree of size N elements, only log(N) elements are needed to generate a proof. A tree with 1 million leaves, for example, would only need 20 hashes to prove the inclusion of any one leaf.

A prover is able to prove the inclusion of any leaf of the Merkle Tree to a verifier:

A Vocdoni account is identified by an Ethereum-like address. This allows us to use standard Web3 signers such as Metamask.

For creating an account, a faucet package is required, since bootstrapping requires a fee in Voc tokens. At the moment, Vocdoni provides a free faucet service for distributing such tokens (integrated within the client SDK).

An account often represents an organization and might have associated an infoURL pointing to an external IPFS file containing the metadata details (name, description, logo, etc.). All Vochain nodes automatically distribute and store this data.

An Election (named a process internally) is a rule-set of options and requirements written into the blockchain state, thus guaranteeing that they can no longer be modified (unless explicitly configured to be upgradeable). The election is created and configured by an account owner or account delegates.

The following election options can be configured:

An election must be in one of the following states:

The states can transition in the following ways:

zk-SNARK proofs are a convenient method to prove something to a third-party verifier without revealing the contents of what is being proven.

The goal of the Vocdoni zk-SNARK circuit is to prove that a voter (identified by a public key) is part of a Census (a Merkle Tree composed of such public keys) without revealing the identity (public key) of that voter. This circuit produces a unique and deterministic identifier (nullifier) that can be processed by a public ledger/blockchain to distinguish whether the voter has previously submitted a vote.

Note: while zk-SNARK voting is enabled in the protocol and available at https://vocdoni.app, it is not yet implemented as part of the current SDK.

The results are computed by a set of rules configured by the election owner and following the Vocdoni ballot protocol, which allows for almost any type of voting such as Range or Quadratic.

Currently, the results computation is not part of the blockchain state logic, due to its potential resources cost (especially for large elections). To mitigate this issue, we introduced a special set of nodes called Oracles that are responsible for computing the results offchain and sending the digested results via an on-chain transaction.

The Gateway nodes will also compute the results locally, so the end user can either trust the Gateway to which they are connected or use the list of Oracles.

Verifiability is guaranteed, since every end user may fetch the list of votes of an election from the blockchain state and reproduce the tally locally.

Vochain transactions are protobuf encoded and signed by the sender. However, the SDK handles this operation transparently for the end user.

Transactions may have a fee that the sender needs to cover from its own balance. The fee cost per transaction is currently fixed and configured in the blockchain genesis file. At the moment, once a transaction is executed, the fee is automatically burned. This is an intermediate solution that will become invalid once the full features of the Voc tokenomics chain are implemented.